The table shows distribution of mortality in breast cancer patients in the screened vs. control population, broken down to breast cancer stages, with 0 being the detected pre-malignant growths (ductal or lobular carcinoma in situ) and 4 the most advanced forms.

Looking at the Malmo trial data, there was +43, +117, -25, 0 and +7 differential in the total of diagnosed cancers in screened vs. control group for stages 0, 1, 2, 3 and 4, respectively. It clearly indicates that screening does help detect suspicious growth earlier, with nearly all of the extra cancers detected being at stage 0 and 1. But that itself does not necessarily - and seems as it usually does not - translate into significant mortality reduction.

It should be noted that the data is only for women diagnosed with breast cancer. Thus "other causes" refers to causes of death in these women other than breast cancer. All deaths in the trial, including those from breast cancer, are given in the following table:

Evidently, breast cancer deaths were a small fraction (~3.5%) of the total deaths in the study population. The differences between two groups with respect to total mortality are also relatively small, without statistical significance. With the accidental, unknown and unspecified deaths left out, the

It should be noted that the control group had nearly 4% higher all-cancer mortality, but 9% lower heart disease mortality. The latter, at least in part, could be related to overtreatment within the screened population, particularly radiation, which is known to negatively affect heart and blood vessels.

The trial used conventional breast cancer staging classification. Expectedly, survival rates vary with the extent and form of a disease. In order to estimate the magnitude of delay in mortality reduction due to screening, study numbers can be combined with stage-based prognostic figures.

There are numerous possible sources for such figures. We'll use one based on the actual set of data, which is also within the usual range, and as good for the purpose as any (West Midlands, UK, 1990-94 diagnoses, followed up to 2004; note that these figures are for conventionally treated breast cancer cases). 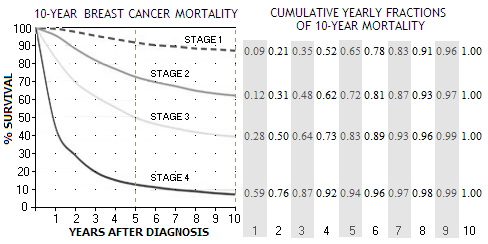 It shows that mortality for all four stages - stage 1 being the least, and stage 4 the most advanced form - is significantly higher in the first 5 years after diagnosis, starting to flatten out toward the 10-year mark. The not shown stage 0, a pre-malignant breast cancer form (ductal or lobular carcinoma in situ), has 5-year survival rate of 98% (somewhat optimistic, because it doesn't account for recurrent cancers). Most carcinomas in situ do not develop into a cancer.

According to these plots, 5-year mortality rates are about 9%, 27%, 50% and 86% for stages 1, 2, 3 and 4, respectively. During another 5 years, mortality rates increasingly slow down, reaching cumulative 13%, 37%, 61% and 92% (in the same order) at the end of 10-year period. Nominal differences in mortality rates between the stages are very significant, but the differences in yearly rates

In other words, nearly the entire mortality differential between the stages is contained within the first 10 years from diagnosis, with the differences in mortality rate after that becoming negligible.

Obviously, the Malmo screening group was not homogeneous, with significant number of detected cancers in it being "interval" cancers (detected between screenings), and among non-attendees. But this is, more or less, the reality of screening, which cannot be assumed to have neither perfect attendance, nor accuracy. Vice versa, non-screened population is always to some extent "contaminated" with opportunistic screening.

In effect, the comparison is

between the population of women that agreed to screening,
and the one that did not,

not between two populations of which one is entirely screened and the other with zero screening.

too small to extract reliable statistical data for such a
low-incidence event as breast cancer.

Such random statistical swings in the mortality ratio between screened and unscreened group are to expect, considering the very low mortality rate, and relatively few deaths (in this particular trial, the mortality rate was about 0.3%, nearly identical for the two groups, or 66 and 63 total deaths - approximately 7 deaths a year - within either of the two groups of over 21,000 women each).

All considered, any analysis of these data can produce indicators at the best, rather than facts, or evidence. But that is what is available, so let's see how significant is, in this trial, the mammography benefit lag that causes some saved lives to fall out of the study period.

Applying yearly mortality fractions (at right on the 10-year mortality plot above) to the trial's 9-year differential per breast cancer stage (0 stage being omitted since with near-zero death rate; with the same approach, it would result in a single death within the trial period, zero outside) gives this proportion of breast cancers that can be expected to fall within the 9-year trial period vs. those that would occur after study end gives the following:


MR = 10-year mortality rate (for simplicity, being nearly identical to the 9-year rate)

The whole idea of the delayed benefit of screening for mortality reduction is that women diagnosed at a later stage - more numerous in unscreened populations - will have higher mortality rate, but it will effectively show only after those women that will die actually pass away. And if significant portion of these deaths takes place outside the study "window", the benefit can be lost. What the numbers show is that this unaccounted for hidden benefit is marginal at best in the Malmo trial
(9-year duration):

only about 6 deaths within the screened population would occur after trial end, nearly offset by 4 post-trial-period deaths in the control (unscreened) group.

Consequently, Miettinen et al. mortality dynamics producing 55% mortality ratio reduction for the last period in a 3-year moving average is much more likely to be a result of tailoring statistical method to selected data, in order to extract desired numerical outcome based on random sequence variations, than representative of an actual statistical  (i.e. average, or expected) mortality dynamics. Even if placed in the context of the "mortality reduction lag" for standard mammography, it is not based on the actual effect. It belongs to the domain of "statistical fiction".

This simplified estimate of the mortality lag effect is not strictly accurate numerically - which is of little consequence considering uncertainties related to the trial data itself - but suffices to indicate the magnitude of "mortality lag" effect: nothing to write home about. It also indicates that the Malmo trial data for breast cancer incidence and mortality are within generally established trends.

But some other implications, left out by the Miettinen et al., as well as other X-ray mammography screening advocates, are potentially significant. If we look at the total number of breast cancers detected, even after 9 years the screened population still has an excess of 134, or 30% more detections than control group. It is to expect that screening, capable of detecting breast cancer earlier, will have higher number of detections initially. But it

should nearly even up within 2-3 years, as those undetected early cancers in unscreened population become large enough for
off-screening detection.

In other words, the excess of breast cancers detected at an earlier stage in the screened population should be nearly offset by an excess of later-stage cancers detected with some delay within unscreened population. Most of the delay due to the absence of mammography screening is the time needed for breast cancer to advance from stage 1 to stage 2. The pace at which this occurs varies individually, from months to years. On the average, it is probably one to two years.

Even assuming that mammography detects 50% more breast cancers a year, initially, and that unscreened population nearly catches up in three years (which is not what really happens in the real world, due to a significant number of cancers detected by screening mammography being pseudo-diseases that would remain asymptomatic), after 9-year period the screened population would still have

less than 10% excess in the total number of diagnosed cancers.

never developed into a real cancer!

This "overdiagnosis" rate directly indicates the rate of "overtreatment" (a fancy word for unnecessary, or unjustified treatment) that the trial's screened population was exposed to. This ghostly excess of detected cancers in the screened population is not an exception of the Malmo trial - it is a pattern consistent in both, trials in general and actual screening practice.

Another worrisome pattern creeping through all major breast cancer randomized controlled trials on the effect of the standard X-ray mammography screening, beginning with the very first (HIP), is the

higher mortality among screened population for the first several years of screening, particularly in women below age 50.

It is present in the Malmo trial as well, as the above graph illustrates. Often referred to as "mortality paradox", it still awaits for an explanation.

But if we look at the disease-caused deaths in the Malmo trial, they are practically identical for screened and unscreened populations. Even in the trials that produce nominally appreciably lower breast cancer mortality for the screened population, more often than not it is offset by the higher mortality from other diseases in this group.

Regardless of what is behind this statistics, it is certainly a piece of information that every woman should know before deciding whether or not to use standard X-ray mammography screening for breast cancer.